Then this story is for you. 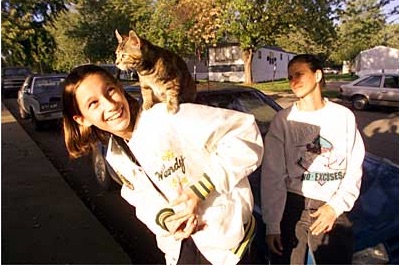 “Move it, trailer girl.” That’s what one perfect son and affluent classmate said to Wendy Williams, 13, of Dixon, Illinois, as he yanked his thumb and demanded that she give up her seat on the bus for him. Criticized for where she lives, how she dresses, and that her family can’t afford expensive but common orthodontia to correct her overbite (the other students have nicknamed her “Rabbit”), this young student at Ronald Reagan High School moves in a world of three-car garages, sports utility vehicles, designer clothes, and wealth that is as obvious as the smug faces of the empowered and self-indulgent solipsists who taunt and mock her. And yet she goes on. She goes on in Ronald Reagan High School where every extra-curricular activity is a pay-as-you-go event, and where if you don’t have unlimited discretionary pocketfuls, you are always on the outside looking in, and she is actually doing well. Still, it must be lonely for a young girl. “I told this girl: ‘That’s a really awesome shirt. Where did you get it?'” Wendy said. She knew it was way out of her price range, but she wanted to join in the small talk. “And, she looked at me and laughed, and said, ‘Why would YOU want to know?'” Wendy smiles, but purses her lips to hide her slight overbite. Her large brown-eyes and her intelligent soft-spoken nature come through like lightning bolts. Her mother asks, “Do you know what it’s like to have your daughter come home from school and say, ‘Mom, the kids say my clothes are tacky.’ To watch her walk off with her head hanging down?” And the sad part is that this is not the inner city where it’s a hard scrabble test of survival everyday. No. This is America at its best: the affluent suburbs. Where we would hope, in these towns of successful people, that the upscale relief from the overbearing burden of seeking life’s bare necessities has turned their young minds to the higher orbits of caring about and helping others.

Wendy’s father earns $9 per hour as a welder. Her mother is a part time cook for Head Start. But Wendy goes to the same public high as children from families that earn $300,000 and more. (That’s what Wendy’s folks will earn in aggregate every 7.5 years, if all goes well.) While we applaud the fact that American public schools educate the rich and poor alike, this seamy side to things, this tawdry lauding one’s good fortune over others less fortunate is not a good thing at all. All of this is in the home town of Ronald Reagan, a poor boy who grew up to be President of the United States. Wendy probably wonders why she can’t have all of the things the other kids have. Instead of lifting the less fortunate up and encouraging them, are we embarrassing them, and demeaning them, in a democratic system that clearly was designed to help them most of all?

This sort of elitism is also seen in the rush for “higher standards” and better standardized test scores in the public schools. It creeps in when communities evaluate these performance benchmarks and discover that less affluent (and less educated) homes produce lower scores than the educated and wealthier homes. It creeps in when communities realize that a higher percentage of girls taking the tests also lowers the averages (centuries of aggressive gender inequity will do that) especially, at the higher grade levels. It creeps in when the disabled and learning-challenged members of a school district are properly encouraged to participate in college tests – because this also lowers the scores on average. Systems that have the largest numbers taking the tests, also have lower scores. But the elitists complain that this lower average scoring marks their school system as “less competitive” and puts their advantaged and prodigal children at a clear disadvantage: coming from such an inclusive system. Then as the rigorous score-improvement systems start to kick in, suddenly fewer girls, fewer Special Education kids, and fewer children from non-college families take the test. In fact, in general, suddenly fewer students overall take the tests. But now, the scores go up for the advantaged, and go down, and out, for the disadvantaged.

People seem to have forgotten what public education is. Besides being the crown jewel of American democracy (no other country has what we have in terms of universal education), and despite the undeniable proof that the top 20 percent of American public students outscore, out-invent, and out-succeed EVERY OTHER COMPARATIVE CATEGORY NATIONALLY AND INTERNATIONALLY, from SATs to GREs to overall success in college and in life.

Despite public education’s amazing success, some people STILL continue to try, in every way they can, to ruin it.

Wendy Williams’s favorite quote is by Eleanor Roosevelt, “No one can make you feel inferior without your consent.” When Wendy gets off the school bus each day after school, her family’s trailer is the first stop. On the way to school, it is the last stop. Each day she gets on the bus last and off first. Her guidance counselor has told her that she should live up to her ideals and pursue her goals. In the end, that will tell all. “Maybe when we grow up, things will be different then,” she says. Despite the abuse from her peers over her clothes, her home, her overbite, Wendy is planning to take some advanced placement courses and is determined to go to college. She hopes to become a teacher. Her counselor says of Wendy, “She’s going to make it.” As Wendy struggles with unnecessary cruelty and ubiquitous, casual elitism, it cannot be easy.

Who will emerge better off as a person? Those who mock her, or Wendy who rises above it, overcomes the assault on her self esteem and finds her worth in something other than money and materialism and appearances?

She’s already teaching us the answer.