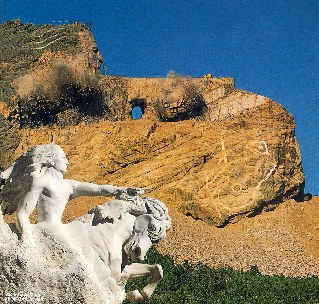 This is a photo depiction of the heroic statue now being constructed in the Black Hills, South Dakota. In the end, The Crazy Horse monument will be 563 feet high and 641 feet long, making it the largest statue on Earth.

The great Sioux Chief of Chiefs, was born in Rapid Creek (South Dakota) in 1840. He was killed when he was only 37 years of age on September 6, 1877. He was stabbed in the back by an American soldier at Fort Robinson, Nebraska while he was under U.S. Army protection.

During his brief life he was a great leader of his people. He had no equal as a warrior or as a chief of a great tribe. He gave submissive allegiance to no man, white or Indian, and claimed his inalienable rights as an Indian to wander at will over the vast hunting grounds of his people. He never registered with any governmental agency; never touched a pen; never signed a treaty. He wanted only peace and a way of living for his people without having to subsist on the white man’s reservations by permission.

There are no known photographs of the great chief Crazy Horse.

Crazy Horse fiercely defended his people and their way of life in the only manner he knew. After he saw the Treaty of 1868 broken, Crazy Horse went a little crazy. This treaty, signed by the President of the United States. Andrew Johnson, stated, “Paha Sapa, the Black Hills, will forever and ever be the sacred land of the Indians.” He took to the warpath only after he saw his friend, Conquering Bear, killed in front of him; only after he saw the failure of government agents to bring the required treaty guarantees such as meat, clothing, tents, and other necessities for his tribe’s existence. In battle, the Sioux war leader would rally his warriors with the cry, “It is a good day to fight; — it is a good day to die.”

In 1877 Crazy Horse’s wife, who was staying at Fort Robinson, was dying of tuberculosis. His only child, a daughter, had recently died of this same disease. Under a supposed “guarantee” of safe conduct into and out of the Fort, Crazy Horse agreed to confer with the base’s commanding officers and to seek medical assistance from the white men. History of the event has shown that the federal troops never intended to let Crazy Horse go free; it was a trap. The plan was to lure him, under a white flag, and to capture him. They cynically planned to take the trusting chief of the Souix, and ship him, in bonds, to the Dry Tortugas in Florida.

The chief had no notion what was in store for him until he entered the guardhouse and saw the bars on the windows. At that moment he knew he was face-to-face with the tretchery of the white man. This sad fate – carefully planned and executed – for Crazy Horse was a harsh, undeniable reality. In a fight for his life, he drew a knife – the fact that he had not been disarmed is treasured proof to the remaining Souix, that their chief never surrendered, as the authorities stated he had – and attempted to get to his Indian friends out of the stockade. Little Big Man, a friend and warrior companion of Crazy Horse – carrying out his orders as an Indian policeman working for the white men – seized Crazy Horse’s arms. In struggling to free himself, Crazy Horse slashed Little Big Man’s wrist. At this point, an infantry man of the guard made a successful lunge with a bayonet and Crazy Horse fell, mortally wounded.

In the minds of the Indians and Native Americans today, the life and death of Crazy Horse parallels the tragic history of all native Americans since the coming of the white men to their homes and lands. One of many great and legendary Indian heroes, Crazy Horse’s tenacity of purpose, his modest life, his unfailing courage, his tragic and deceitful death set him apart and above all others.

(#1): Korczak Ziolkowski, the original sculptor (1908-1982) who worked for forty years on the mountain monument to honor Crazy Horse with no compensation. He worked for many years in complete obscurity, all alone. Here he is hand drilling the first blast holes in 1948, the year he first began.

(#2) Today, the statue’s progress is depicted in the middle photo. The project celebrated its 50th anniversary in 1998, and it is still impossible to predict the date of its ultimate completion.

(3#) This last photo (together with the photo at the top of the article) will give you a glimpse into the future.

Korczak is now dead, but his dream of never letting the memory of this courageous Indian chief pass into oblivion goes on after him, as his children and grandchildren “pick up the chisel” in his place. 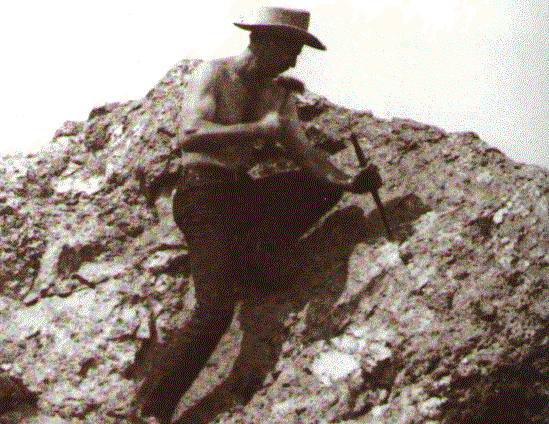 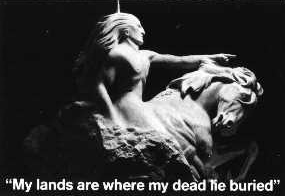 In a strange way, the sculpture and the sculptor are interwined in rock and reality and with Crazy Horse’s legacy itself.

Here is the planned inscription:

When the course of history has been told,

and duty ours to place before the world,

a chronicle which will long endure.

inevitably we must pass into oblivion.

This land of refuge to the stranger

was ours for countless eons before:

Our gifts were many which we shared

and gratitude for them was known.

But later, given to my oppressed ones

were murder, rape and sanguine war.

greedy usurpers of our heritage.

For us the past is in our hearts,

the future never to be fulfilled.

To you I give this granite epic

for your descendants to always know —

“My lands are where my dead lie buried.”