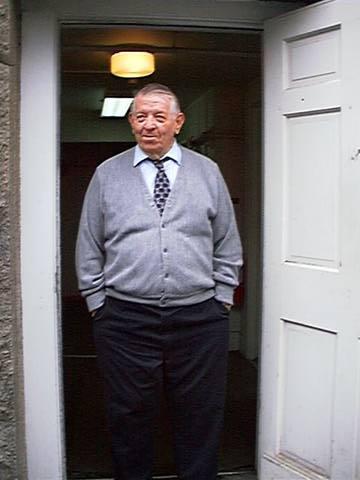 In the great scheme of things, he was not a sound bite. Mostly, he said kind things that put things into his own perspective. “Pretty good, considering,” he would say in response to the everyday, “How’s it going, George?” We could always laugh about how the town did things. I would see him driving by, and he would stop to say “Hi.” Like a lot of men, his jobs seemed to define him, but, in George’s case, that was misleading.

I met him during budget negotiations while I was on the Finance Committee. I had been appointed as the liaison to the seven or so jobs George shepherded around, through, and over the sideways and byways of our town government. He was an eminently likable man. As I sat at his funeral last week, I was thinking of how he had once wanted a new chair, because the one the Town had appropriated was so painful to sit in that he felt it was hurting his back. It had been the Veterans’ Agent’s chair for as long as anyone could remember. He could have cut his paltry budget to “accommodate” the new expenditure, but he felt that that was the wrong thing to do; too self-serving, almost dishonest. Like he was hiding something. So despite the years of discomfort he remained more uncomfortable with this common bureaucratic subterfuge, than with the painful experience of sitting in the chair. He finally decided to make a straight forward pitch for “new money.” It was about $200, as I remember it. Finance Committee members asked if he had checked throughout the town to find another, better, chair that could be swapped. He said, “Who should I give this chair to?” The option of foisting a painful, broken chair on someone else was not something George could accept. “Anyone who has a good one, won’t go for that deal.” Then, a Finance Committee member asked if he had tried to repair it. He looked at me and our on-going joke about how the town worked occurred to both of us simultaneously, and we raised eyebrows and smiled at each other. The other members of the Finance Committee saw the exchange and started to harden-up. “Can’t you get another year out of it, George? You must be able to get just one more year out of it.” George said, “That’s what you said last year.” His eyes glinted slightly in my direction. This was my first year as his liaison. “Mr. Chairman,” I said, “the man has said that he cannot sit in the chair any longer. It’s broken. It’s painful. It’s $200 for a new one. He has said he is willing to cut his budget to accommodate this one-time expense, but that he feels that that would be irresponsible. So he is appealing to us as human beings to do what we said we would do last year if he, ‘could just get by for one more year.'” After more debating, including questions about whether it was the seat of the chair or the back of the chair that was causing the pain, the Committee voted 5 to 4 to grant this Town official a new chair. It seemed a victory or sorts. I walked with him out to the hall. “Well, there you go, George. You’ve got your new chair.” He said, “I’ll believe it when I see it.” He was right. That was the budget of 1992, when massive cuts and layoffs were made during a special Saturday meeting. I was there when the chair came up again, and it was cut with casual ease of Zorro’s blade flicking through a burning candlestick. Swoosh. Gone. Cut away without hesitation. Some months later I stopped by the office, hoping to see that he had somehow gotten a new chair anyway. Nope. There he was sitting in the broken old one. “I picked up a new cushion,” he said. “That helps.” He adjusted himself in the chair uncomfortably.

His son, George, Jr., gave a beautifully simple eulogy about what he had learned from his Father: faith, practice makes perfect, teamwork, be practical, duty, education, the Golden Rule, love of science and new things, don’t waste time, family love, principle, persistence, the little things of human life, cherish your roots, take pride in what do but don’t be proud, love your country, love your town, love every group, love every project you do, and every single person you meet. His son then said, “I know that when my Father was up there waiting on Friday night after he died, the good Lord looked down and said, “Come right in. Well done, good and faithful servant.” And eyes all over the church welled with love for George, his family, for his amazing life: unrecorded by television cameras or in interviews with Barbara Walters; never uplinked via satellite or broadcast around the world; never caught in the barrage of flashing cameras for all recorded time. No, this life is recorded only in the hearts of those who loved him and who knew him. That record may well sink more deeply, more permanently, into humanity’s DNA because the connection is so direct, so intimate. I know. I could feel it spreading through me like a warm hug, seeking out my pettiness and replacing it with more affection for others. I could feel his goodness finding new places within me to fill. I knew what everyone knew that day at the Star of the Sea Church: that I was a better person for having known George. His spirit has risen to the heavens, and on its way, has lifted us all up a little bit higher, too.

So, in the great scheme of things, how many of us will ever achieve that? A quiet life, that by its example of love and goodness, will never be forgotten. In a world of sound bites, and uplinks, and worldwide seamy, little scandals that swell up and block our view as if they are the most important things of all, his life reminded me that they are just tiny little things that seem monumental. And, it reminded me, that those mirages disappear in the presence of a truly great life, so full of humanity, so full of giving and such a good example.

To me, George Carruth really made a difference. He will not be forgotten. Because in the end, the good you do is the only power you have. And his was a powerful life, indeed.