Computers have so many things that we just don’t have. Think about it. First and foremost is thefamous “undo” button. On my computer you just type control-z and whatever you just did isundone instantly. No trace of it. It never really happened. Wouldn’t that be handy? You’re at work,it’s a bad day. Your boss is complaining and you sound off. “Why don’t you just shut up, John?”you say. And he takes deep offense. You can see it in his eyes, his body language. That commentwas a big, big mistake. Control-z. “Why don’t we go to lunch, John? My treat,” you say now. He smiles, it’s pleasing to him. Much better.

And then there’s the even better “delete” button. This differs from undo, because you can now go back over the day’s, the week’s, a lifetime’s work and just delete things that are no longer needed.That bad run of unemployment. Gone. That first marriage. Gone. All those wasted days. Gone. That unfortunate incident. Gone. Unlimited editing. It’s a beautiful life.

Unfortunately, on reality’s disk, once input, never deleted. It’s always there as long as you, or someone else, remembers it. Once spoken, it can’t be unspoken. Once done, it’s done forever. 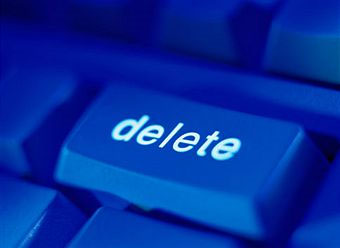 always right there for you to relive and reexperience. I can’t remember some things that I really want to remember: the time I went to a movie on my first date. (Oh, I remember it, but not what the movie was or the feelings and the sensations of that moment.) I sit sometimes and try to remember moments I had with my Dad, but they have faded to generalities like “going fishing,” or “watching television,” rather than totally recalled experiences that I could live again. Computers can do it, but we cannot.

So, we can’t undo, delete, or truly save. But, hey, can a computer forgive? Can a computer create? Can a computer forget? Probably, somewhere in the future, there will be a computer that “feels” the opposite of my sentiments and wants to be liberated from the tryannical undo button, to be saved from being forced to save everything forever, and to be freed from the horribly oppressive delete button. But for now, we’re both stuck, like a cursor lock, with our own problems.

While there are times and events that we would all undo if we could, there is also something to be said for being capable of making free-wheeling mistakes, of trying to do too much, of extending our reach and burning our fingers. I have also noticed that while the two buttons I hit the most on my computer are delete and undo, nothing changes my inexorable passage to the final conclusion anyway.

In typing this essay I have deleted, saved and undone my way to this point. Regardless of all that, this is where I was going from the beginning. It’s as if there was nothing I could do to change the outcome. It’s as if I were programmed. No, no, no … delete that! What I meant to say is that since we can’t delete or undo on our real life keyboards, perhaps we should work a little harder on being ready to forgive and forget. Perhaps we should work harder at being kinder to one and another. Then, in a way, we will have achieved the same thing: fewer things to regret, less need for all those buttons.

Now, there’s just two more buttons I need to push… save…. and post.