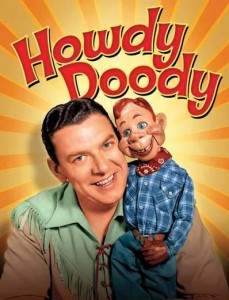 Robert Schmidt was born with little or no fanfare on November 27, 1917, the son of a coal miner in upstate New York. His father had a year earlier survived a cave-in which killed everyone else in the mine at that time. So little Bobby started off, shall we say, as a special treat for his lucky Dad. And

Bobby’s life became a treat for all of us, although few know of him today.

He was child piano and the organ virtuoso and by the time he was 15, he was singing and playing on a New York radio station. He formed with a group called the High Hatters with Foster Brooks who later achieved fame with Dean Martin as his constantly drunken pal. Bob went on to become a popular disk jockey, and when he took over a morning quiz show, he changed his last name to Smith.

In 1947, he originated the idea of a children’s television show, and it was not that popular with the bosses of the new visual media. But in the end, Howdy Doody, became so wildly popular that it was broadcast five days a week, for a total of 2,343 live performances, until its final episode on September, 30, 1960.

Imagine you are six years old. It’s 1953. You are on the floor of the living room, waiting. On the small, round television screen is the ubiquitous test pattern because in those days shows didn’t begin until late afternoon. Suddenly the pattern jumped a little, then again, and then there he was, smiling at you. “Hey, Kids! Do you know what time it is?”

It was all in black and white, of course. We would sing along at the top of our lungs. Clarabell the Clown (Captain Kangaroo was the first Clarabell), who never said a word until the last show – when he looked into the camera and simply said, “Goodbye kids” – but usually he just honked his horn in agreement or disagreement with Bob. Then there was Chief Thunderthud, Princess Summerfall Winterspring (who began as a puppet and transformed into a human), Mayor Phineas T. Bluster and his family, the quintessentially famous Flub-A-Dub, a meatball-eating wild animal composite that Bob said he caught in a jungle of South America. Then there was the Super Talkscope, that enabled Bob and Howdy to instantly see any place and any time they wanted. And, then of course, there was the original peanut gallery.

Did you know that Howdy had 48 freckles, one for each state? There were actually three Howdy’s: Howdy Doody, Double Doody, and Photo Doody (no strings) [above right]. 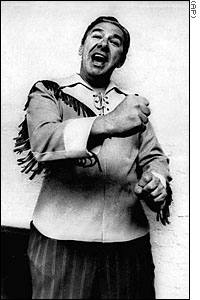 The Howdy Doody Show wasn’t a fancy production. But it was very funny. It was just for kids. And the kids of those days loved the show with a passion now reserved for video games, smartphones and power struggles with confused parents.

Those kids grew up, and now they are grandparents learning to text and “like.”

For them, when someone asks, “What time is it?” They still all think of that crazy, rustic, primitive TV show and say in their minds, “It’s Howdy Doody Time!”

Trust me. I know. There’s always time to smile, relax and sing the song. In our hearts, we have stayed in the peanut gallery.

It’s fun and safe there.

Imagine. The son of coal miner, created a show on a 8″ round screen, the first ever for kids, and people in their sixties and seventies still, not only remember it, but still speak it’s opening phrase word for word. It may seem like nostalgia, a wistful desire to return in thought or in fact to a former time in one’s life – but I wonder. Could it be that longing in us all for innocent fun? Longing for just a moment when that side of human nature that only wants to goof off in the freedom of childish joy: no repercussions, no regrets, no self-persecution, no self-examination? Could it be a longing for a moment of unfiltered humanity? Is there a time when you feel that longing? Well, here you go… it’s Howdy Doody Time. Enjoy.